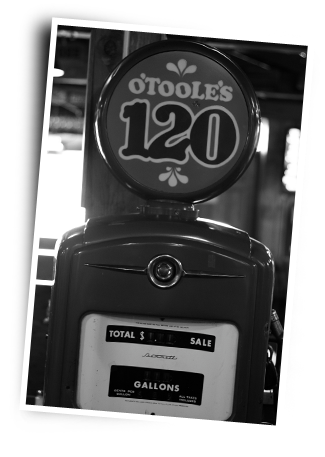 Selecting the name Roadhouse was intended to express the restaurant’s original concept of offering great pub-food & drink, at a roadside location, in a close-knit neighborhood.

O’Toole’s Roadhouse was frequented by individuals who worked and lived in the neighborhood. It quickly became a meeting place for people to enjoy a drink and a bite after work, on weekends, or while shopping and conducting business in town.

O’Toole’s Roadhouse began with the unique restaurant concept intended to elicit memories and nostalgia. It was a place people could frequent, to enjoy good food and drink in an atmosphere full of artifacts dated back to a time when our Grandparents were alive. Hence the old gas pump, license plates and Coca-Cola signs from yester-year.

O’Toole’s embraced the idea of providing a relaxed and casual pub atmosphere (not unlike those frequented in Ireland) for people to enjoy, in a town nearby. When visited, The Roadhouse exuded the sense that our Grandparents might have enjoyed a place like this too.

O’Toole’s never pretended to be a gourmet food establishment, but rather a great English pub that did fish & chips, burgers, fries and sandwiches right! O’Toole’s Roadhouse stood out from the rest by combining great pub food with an extensive draft beer selection; this, at a time when most establishments offered only a few bottled-beer choices.

In the 1990’s, O’Toole’s Roadhouse changed its name to O’Toole’s Restaurant Pub, as the menu choices evolved.

Apart from the name, not much has changed. The fish & chips, burgers, fries and sandwiches are still part of our history and specialty. Improved are our menu choices; expanded to offer a variety of new specialties while our draft and bottled-beer list has grown to please even the most discerning tastes.

We listen to our customers and know many have been looking for a gluten free restaurant in Albany. That’s why we’ve developed an extensive gluten free menu including appetizers, meals and, of course, gluten free beer!

Continuing with its original nostalgic feel, coupled with the popularity of an Irish pub, O’Toole’s proudly carries on the tradition of serving great food and drink, in a laid-back atmosphere where all are made to feel welcome!

The BackRoom at O’Toole’s

In 2017 O’Toole’s in Colonie expanded to include a new event room. The BackRoom at O’Toole’s is the perfect place to host your part or special event and can accommodate up to 100 or 150 guests. Learn more about the BackRoom or contact us to book your party.

O’Toole’s Restaurant Pub looks forward to being your neighborhood pub for years to come!